How to register a Cyber Crime Complaint?

How to report an FIR for a Cyber Crime?

If you do not have access to any of the cyber cells in India, you can file a First Information Report (FIR) at the local police station. In case your complaint is not accepted there, you can approach the Commissioner or the city’s Judicial Magistrate.

Certain cyber crime offenses come under the IPC. You can register a cyber crime FIR at the nearest local police station to report them. It is mandatory under Section 154 of CrPC, for every police officer to record the information/complaint of an offense, irrespective of the jurisdiction in which the crime was committed.

How to file a Cyber Crime Complaint online?

The online portal where a victim can file a cyber crime complaint is https://cyber crime.gov.in/Accept.aspx, an initiative of Government of India that caters to complaints pertaining to the online Child Pornography (CP), Child Sexual Abuse Material (CSAM) or sexually explicit content such as Rape/Gang Rape (CP/RGR) content and other cyber crimes such as social media crimes, online financial frauds, ransomware, hacking, cryptocurrency crimes, and online cyber trafficking. The portal also provides an option of reporting an anonymous complaint about reporting Child Pornography (CP) or sexually explicit content such as Rape/Gang Rape (RGR) content. One can follow below-mentioned steps to report a cyber crime online –

STEP 2: Click on ‘Report other cyber crimes’ on the menu.

STEP 4: Read the conditions and accept them.

STEP 5: Register your mobile number and fill in your name and State.

STEP 6: Fill in the relevant details about the offence. 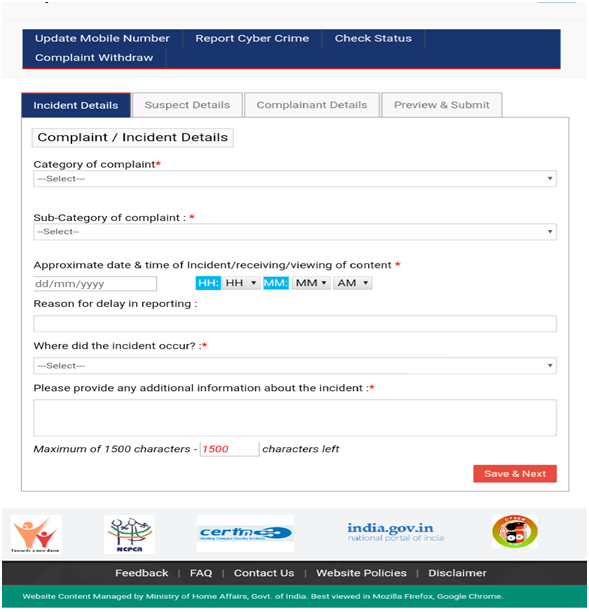 Note: You can also report the offence anonymously. 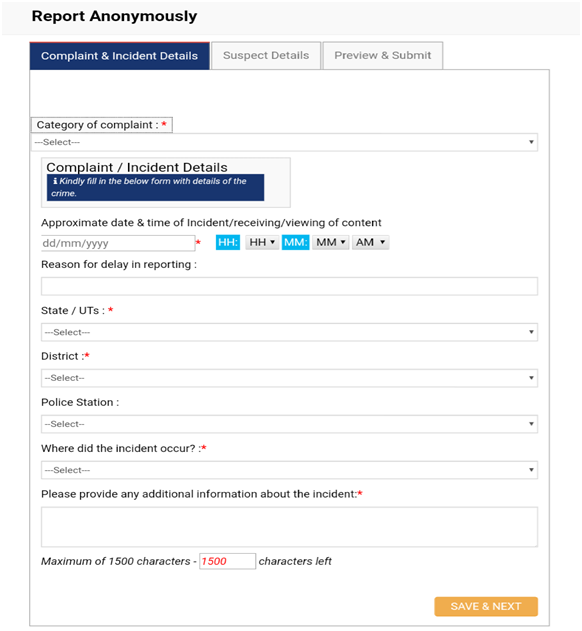 Format of a Cyber Crime Complaint:

There is no separate format for filing the complaint about cyber crime. You need to write a letter specifying all the details about the crime and file it in the nearest police station/cyber cell. You need to provide a name, mailing address & telephone number along with an application letter addressing the head of a cyber crime investigation cell and related documents as attachment.

How to file a complaint against Cyber Stalking?

Cyber Stalking is the persistent use of the internet, e-mail, social networks, instant messaging or related digital devices to irritate, badger or threaten people. Prior to the February 2013 amendment, there was no specific law against it, now it falls under the purview of the Criminal Law Amendment Act, 2013.

Under Section 354(d), if any person follows a woman and tries to contact her in order to foster personal interaction despite the woman’s disinclination towards it, then he is committing stalking and can be charged against it. Also, if a person monitors the use by a woman of the internet, email or any other form of electronic communication, he commits the offence of stalking.

Filing a complaint against Cyber Stalking:

How to file a complaint about Cyber Bullying?

Cyberbullying is the bullying executed through digital devices like computers, laptops, smartphones, and tablets leading to humiliation. It also comprises posting, sending or sharing negative, nasty or false information about another individual for causing humiliation and what is popularly known as character assassination.

What to do if your Cyber Cell refuses to accept your complaint?

If the cyber cell refuses to file or accept your cyber complaint, you can fill a direct representation to the nearest Judicial Magistrate stating the fact that the complaint has not been accepted under any/certain circumstances.

What are the documents required to file a Cyber Crime complaint?

Following  are the documents required to file a Cyber Crime complaint,

For Email Based Complaints:

For Social Media Based Complaints:

For Business Email Based Complaints:

The following documents are required in relation to the suspected employee(s):

For Bitcoin Based Complaints:

The rise of cyber crime has resulted in targeting the most vulnerable segment of the society, i.e. women and children. The most common and frequently reported sorts of cyber crimes against the women include cyberstalking, pornography, morphing, online harassment, trolling and bullying, threat and intimidation, and email spoofing. While against the child, the types of cyber crime are the circulation of pedophilic videos/ messages, child pornography, etc. The extent of mischief has degraded to a level where the top searches for a porn site show result in rapes and child pornography. Also, there are some online social games such as Blue Whale which led to the unfortunate deaths of the many innocent teenagers.

The Ministry of Home Affairs introduced the scheme for cyber crime Prevention against Women and Children (CCWC) to handle cyber crimes against women and children effectively in the country with an estimated outlay of Rs. 223.198 crores (approx), for formulating:

What are the Consequences of Cyber Crime?

It is really important to know how to report cyber crime as the consequences of cyber crime are borne by the victim.